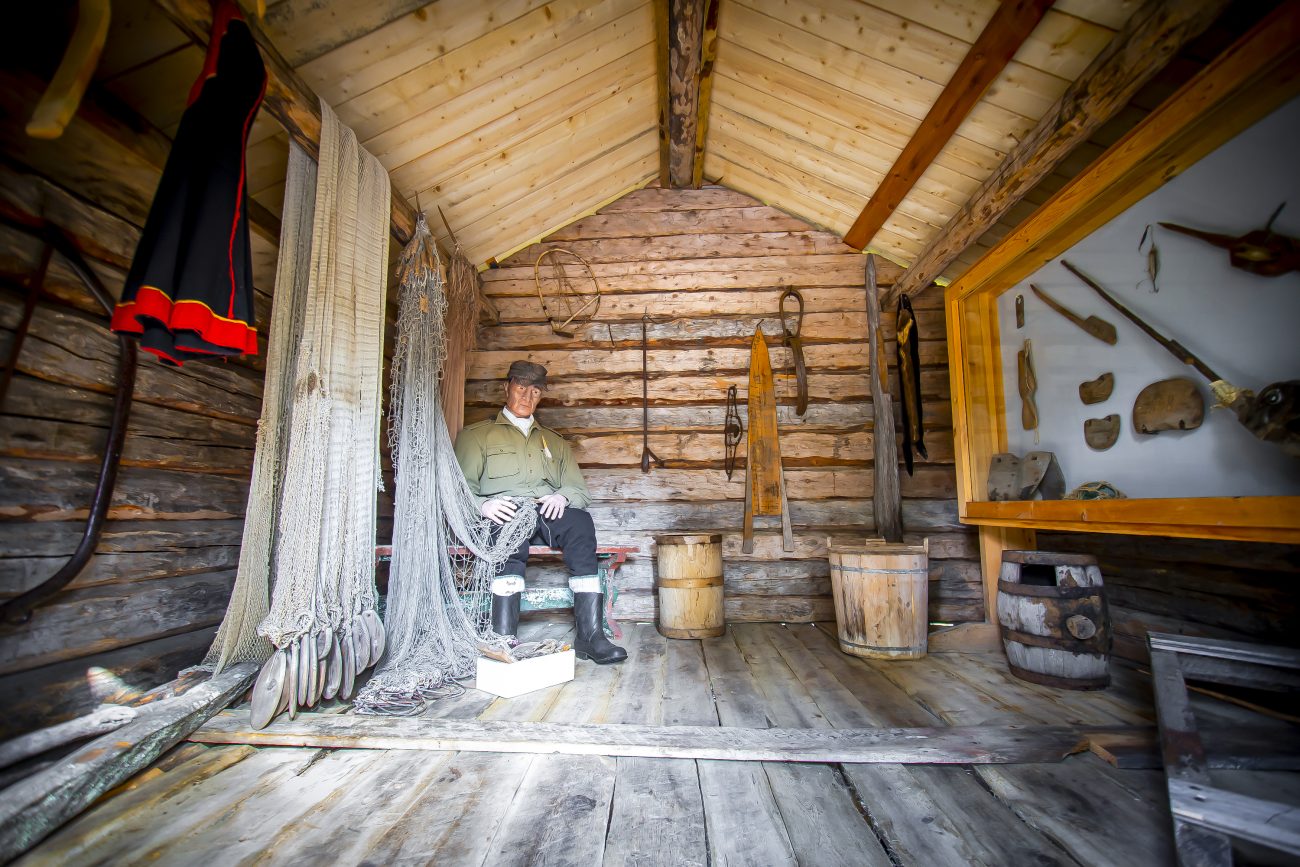 Our Open-Air Museum has much to view. The area has nearly fifty buildings and structures grouped by cultural areas and the nature of their use along an 800 metre-long trail in the shape of a reindeer herder’s lasso. The trail includes exhibits on the cultural heritage, architectural heritage and livelihoods of Finland’s three Sámi cultures.

The Open-Air Museum’s area is protected under the Antiquities Act, pets are not allowed. Please stay on the area’s marked and sheltered trails. The area is not wheelchair and strollers accessible.

Exhibits from traps and sledges to complete dwellings

Tirro Farm is the heart of the Open-Air Museum. It represents the building culture and way of life of the house-dwelling Sámi in the 1800s. Another particularly interesting exhibit is Mirhamintupa (the Myrrh Hut), a court house hut that has been moved from the border of Inari and Kittilä. It was used in court proceedings until 1905. The hut’s walls have been filled over the decades with, for example, the signatures of people waiting for their sentences.

In addition to wood building’s the museum area contains various movable Lapp pole tents, lean-to shelters and storage structures as well as turf buildings.  The Open-Air Museum also has various types of traps, which were previously used for hunting. The Open-Air Museum’s exhibition hall has boat and sledge exhibits.

The Open-Air Museum is also an ancient monument

The Sámi Museum’s Open-Air Museum tells of the story of Inari’s 10,000-year history.
We know that people have lived on the shore of Lake Inarijärvi at its meeting point with the River Juuanjoki as early as the Mesolithic Period of the Stone Age nearly 10,000 years ago. The area has also been inhabited numerous times during the later Stone Age as well as in the early Metal Age and the Iron Age (8,800-5,600, 1,800 and 1,400-1,200 years ago), making it a multiperiodic human dwelling area.

Excavations in the Open-Air Museum’s areas have unearthed artefacts and remains that tell of the hunter gatherer life; fire pits and the foundations of Lapp huts, as well as various tools, ceramics and the burnt bones of animals used as food.

The Open-Air Museum’s area is protected under the Antiquities Act. For this reason, visitors should only walk along the area’s marked and sheltered trails.

History of the Open-Air Museum

The Sámi Museum was originally established as an open-air museum in 1959.  It was established by Sámii Litto – Saamelaisten yhdistys ry., which was founded in 1945 as Finland’s first Sámi association.

The origin of the Sámi Museum is tied to the final part of the Second World War, the  Lapland War. As a result of the war, the majority of Lapland’s infrastructure and property was destroyed. For example, more than 90% of Inari’s buildings were destroyed. The Sámi way of life also began to change after the war as a result of which homemade daily tools slowly disappeared.  The Sámi became concerned about the changes to their material culture and the idea for establishing a museum came about.

At the  beginning, collection and recording of cultural heritage was carried out in cooperation with student clubs from the University of Turku – Varsinaissuomalainen osakunta and Pohjalainen osakunta. The connection with the university was started by Professor Paavo Kallio, Director of the Kevo Subarctic Research Institute.

The Open Air Museum, which is over six decades old, has its own museum history, which also tells about attitudes towards the museum buildings and their repairs during different eras.