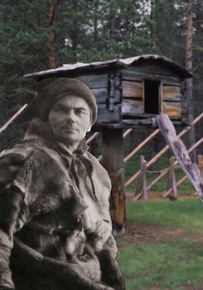 The Sámi Museum Siida’s 20th anniversary exhibition tells about Johan Nuorgam. Johan Nuorgam from Lake Iijärvi (1910–78) was an early broker of Sámi culture. He was a connoisseur of Sámi traditions with high proficiency in the Sámi language, whom many researchers used as their source. In the 1930s, he worked as a guide of the Seurasaari Open-Air Museum of the Finnish National Museum, collecting artefacts himself, too. He became a journalist, politician and culturally oriented person, who founded the Inari Sámi Museum at the end of the 1950s.

The exhibition Johan Nuorgam – A Sámi Cultural Broker looks at the colourful life of Nuorgam with the help of words, photographs and artefacts. The exhibition focuses on the rare set of artefacts collected by Nuorgam in the 1930s – a collection which is, at the same time, the first set of artefacts restored to the Sámi Museum by the Finnish National Museum. The photographs, recordings and press cuttings that concern Nuorgam’s life give us a surprising picture of the networks this Sámi man had both in Finnish and Sámi society.

Nuorgam worked as a contributor and editor of the magazine Sabmelaš and as a journalist in the newspaper Tunturisanomat which came out both in Finnish and Sámi; in addition, he was a founder of the Sámi Radio in Finland. His deep knowledge of Sámi culture is manifested in the two-volume book The Lapps in Finland up to 1945 by T. I. Itkonen, and in the exhibition visitors can listen to him telling stories both in Sámi and Finnish. The exhibition also shows the significance of Nuorgam as the person who initiated and carried out the founding of the Inari Sámi Museum: he was ahead of his time as concerns his view of what a museum is.

The exhibition is produced by the Sámi Museum Siida.